I jumped on the family Lazer Tag bandwagon when I saw how positive the reaction and result from my big bro, Rob’s kids. It really is such a relief to have something cool that the kids can play with outside instead of sitting by the television all day or staring at their tablets. They now play and run around, which I don’t really mind since we have a big yard with a ton of room to run around.

My brother heard good things about this product, the Laser X 2 player set, and practically begged me to buy it, so I could write a review for his site.  He gave me his old road bike when I first got in to biking, so I figured I owed him one. 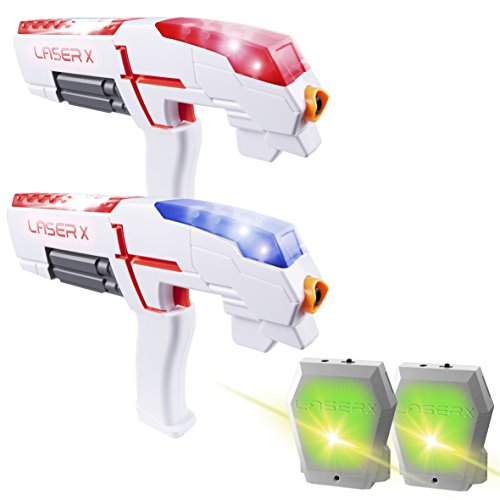 First impressions of the set is that it’s well-designed. There was a different color for each team and the guns have pretty much everything in twos. The set was very easy for me to set up and I usually have issues with these things. The instruction manual included in the package is a life saver; and even though most people might not need it, I certainly did.

The kids have had these toys for about 2 weeks now and so far, I haven’t had to change any batteries, even though the guns have loud sound effects. I loved the sounds and the guns worked well and were very responsive to tags. I noticed there was a constant beeping sound when the guns are switched on, which is not really a problem when they’re playing but it can be a bit of a downer during hide and seek type games. Reloading the gun is easy and takes a few tries to get used to it. The guns are made from high-quality plastic and have proved child- friendly. They’ve been dropped a few times on hard surfaces and are still working perfectly. They also don’t come with those cumbersome vests that the old sets from the 80’s used. They are fun overall and the children love being able to setup their games by themselves.

Overall, I am satisfied with the Laser X gaming set and I would consider buying one or two more sets for when the rest of the family comes over during the holidays.  Maybe not my brother Rob’s family because they have more laser tag sets than they can handle, and for the most part are die-hard Phoenix users.  But I would definitely recommend the Laser X gaming set for those who want to capture the more old school Lazer Tag feel without the clunky vests.

You can check out other reviews on Amazon as well.